According to some reports, last week America recorded more than 75,000 new cases daily – five times the rate of all Europe. One thing is clear, explains Fred Kostecki, managing partner in St. Louis and the network’s North American Regional Chair. Economic recovery, within the United States and the wider North American region, is totally dependent on the region’s ability to control the virus.

Life after lockdown: the view from North America

Much like in romance, M&A matchmakers face an unenviable proposition: get it right and it’s a thing of beauty, get it wrong and the inevitable result is a messy situation without any winners.

Survey: North American M&A could see private equity take the lead as funds seize upon valuations, distressed opportunities through 2020 and beyond

Since Covid-19 began sweeping the globe, declines in North American M&A have been swift, with deal totals in the first half of 2020 sinking to some of the lowest in recent memory. Investor sentiment has sunk with them and most participants in our research say they are putting M&A on hold until the Covid-19 crisis is resolved. While most respondents say they will be decreasing investments into North America in the year ahead, there are holdouts who say they will stay the course or even increase deals, betting that the pandemic is a temporary dampener and hopeful that North America will recover strong.

"We are finding that dealmakers still have concerns and questions about the impact Covid-19 will have on North American deals, however, the hesitation to bring deals to market, in a few sectors, has dissipated as the health crisis extends and evolves," says William Chapman, Partner in Baker Tilly in the USA.

"We have seen is a sharp decline in deal volumes but even a bigger fall in deal values. While mega deals have been non-existent, deal makers will have an appetite for middle-market transactions which today have more attractive valuations and are easier to finance than their mega deal counterparts."

Almost all respondents (87%) agree the pandemic and the subsequent uncertainty are driving decision making, but it remains unclear how (or if) opinions will change once the current health crisis abates and the economy progressively reopens. 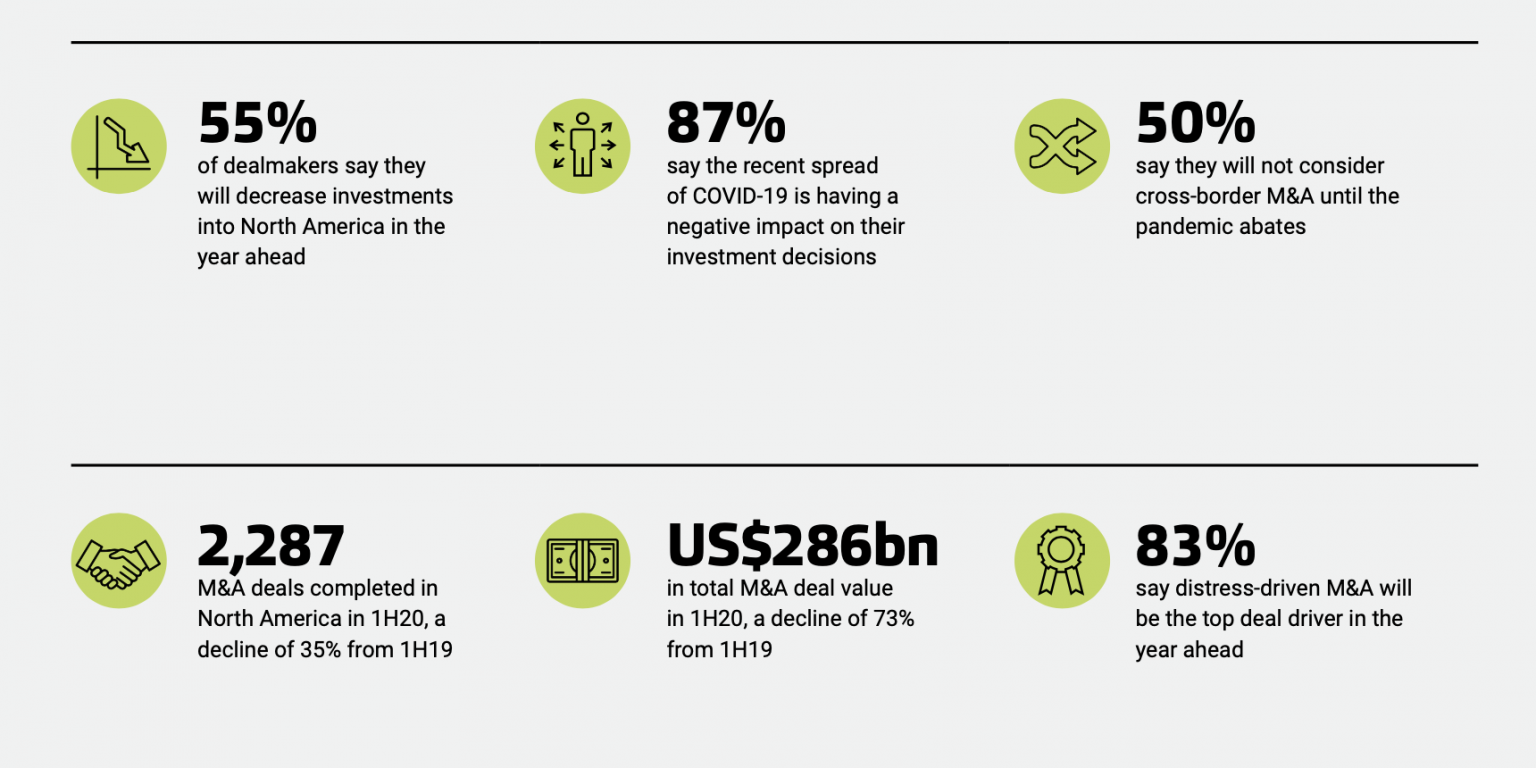 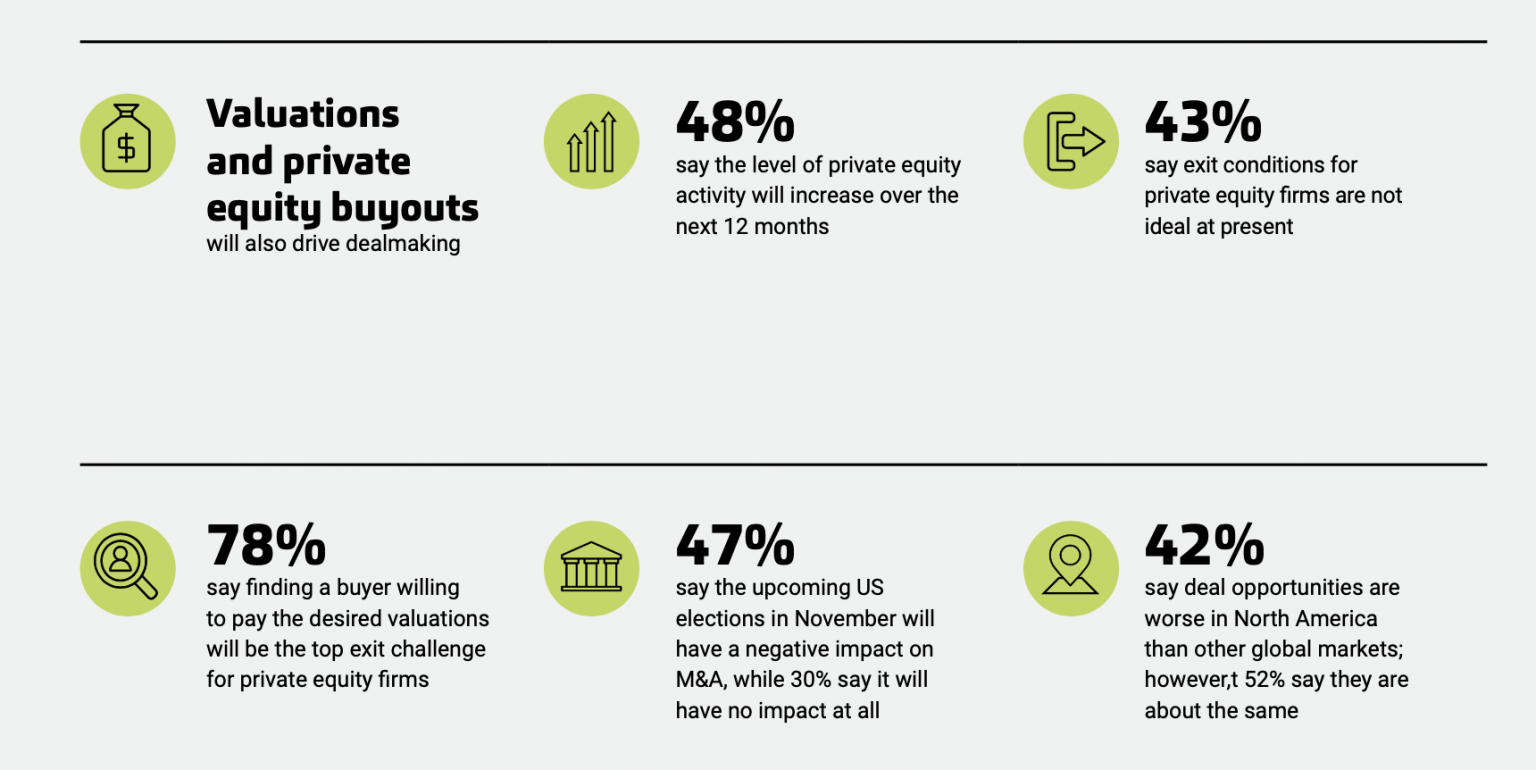 Indeed, the pandemic has gotten in the way of basic deal logistics and has delayed sales processes, which is bound to hit overall M&A in the coming months and quarters, according to Mergermarket intelligence. Some respondents also see the upcoming US elections in November and the now-entrenched US-China trade war adding to uncertainty and a general lack of enthusiasm toward the market.

Almost half of respondents (47%) believe the upcoming US elections in November will have a negative impact on M&A. Another 30%, however, say it will not disrupt dealmaking at all and that M&A will continue its current momentum.

"Every election is a choice, but it rarely feels like the stakes are as high or the difference in approach is as stark," says Chapman.

“With an election coming on the back of a pandemic, it’s naturally going to put some deals on hold. That said, some sellers are moving forward as they are concerned about how capital gains taxes may change post-election.

"The other issue that has been growing in importance each time we look at North American M&A is the uncertainty and impact on supply chains caused by the now-entrenched trade war with China. Each time it appears there could be a resolution dealmaker confidence improves, but a détente seems unlikely in the near term."

"As we get close to the U.S. Presidential election, carried interest is sure to become a hot topic of debate between the candidates.  Any material changes to carried interest tax provisions could have a profound impact on the pace of Private Equity deal making," says Scott Moss, Partner in Cherry Bekaert in the US.

Whatever their intentions, dealmakers foresee several trends shaping North American M&A through the rest of 2020 and early next year. Distress-driven deals and depressed valuations will arise as companies and target assets struggle to recover from lost revenues and operational disruptions as a result of Covid-19. These buying opportunities could see industry leaders adopt consolidation strategies to complete mergers within their primary sectors to strengthen their market positions against recession and future market complexities.

"When conditions are bad at the end of a cycle, big deals are harder to come by, and we could see in late 2019 that the gap was widening between what sellers wanted to achieve and buyers wanted to pay," says Chapman.

"Deals that come to market now include distressed sales and those where the seller has a strong exit incentive. There will also be sellers who are not prepared to sell the whole company at a depressed price but who are on the hunt for growth capital and need to compromise.

"This is going to create the opportunities in some sectors for bargain buying — and excellent opportunities for those who have dry powder and can take advantage."

Regardless of market conditions or outlook, many respondents say the year ahead will be private equity’s time to shine. With record amounts of dry powder at their disposal, respondents agree that buyouts and large moves from private buyers will be a leading trend, creating competition for assets and buttressing M&A to some extent against more significant declines.

"Fundraising in the past few years has been very favourable for private equity but there are clouds on the deal horizon and many Funds will find it more challenging to generate the bell weather returns which their LP’s have become accustomed to receiving," Moss says.

"It will force the hand of some PE firms to invest, but there are also fewer exits as PE firms work to revive assets, extend hold periods and restructure portfolios rather than shedding non-performing assets or moving to IPO.

"Private equity remains the best hope of a revival in M&A in the short term, and will be the biggest driver of competition for assets. As the market shows signs of early-stage recovery, we will see PE moving hard and moving fast."